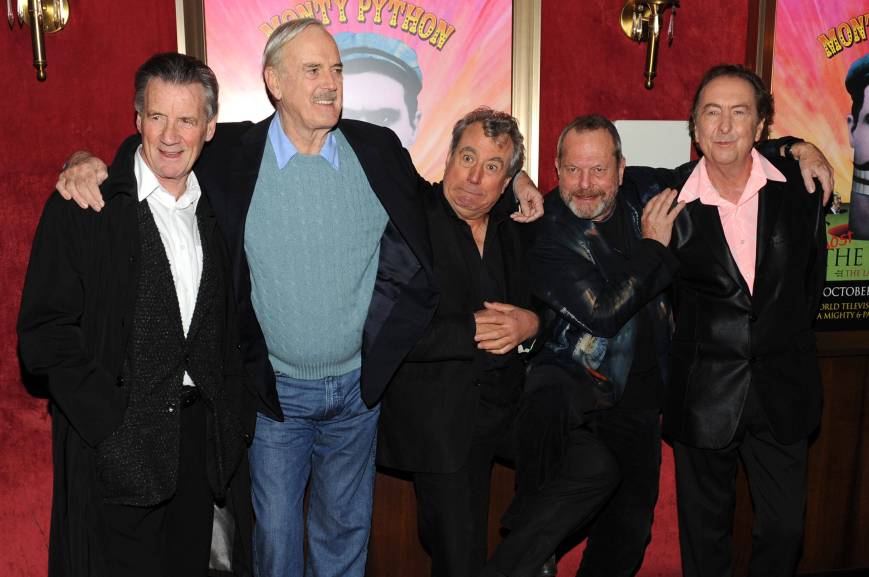 The legendary comedy troupe call it quits after an amazing 45-year run (Photo: courtesy of entertainmentfuse.com)

Unless you’ve been living under a rock for the last 45 years, you’re likely to have seen or heard at least a couple skits from the legendary British comedy troupe Monty Python. From the hit BBC TV show Monty Python’s Flying Circus to full-length films such as Monty Python and the Holy Grail and The Meaning of Life, the iconic group has been creating laughter and “wtf” moments since 1969. Now, after nearly half a century of delighting fans with sketch comedy, movies, and absolutely ridiculous songs, the surviving cast members of Monty Python are calling it quits.

After a ten straight nights of farewell performances, the quintet (consisting of Eric Idle, John Cleese, Terry Jones, Michael Palin and Terry Gilliam) performed live together for the last time on Sunday night, July 20th. Properly and hilariously dubbed “Monty Python Live (Mostly): One Down, Five To Go” (referencing the fact that fellow founding member Graham Chapman passed away in 1989), the reunion/farewell show culminated with the cast leading the audience in a stirring rendition of their classic song “Always Look On The Bright Side Of Life” from their irreverent 1979 movie, Life of Brian. Finally, the night ended as you might expect, with a standing ovation and raucous applause.

Monty Python is not only my favorite comedy troupe of all time, but one of the most influential. Without Monty Python’s Flying Circus I think it’s fair to say that other sketch comedy shows such as Saturday Night Live and In Living Color might never have existed.

I found the farewell show to be bitter-sweet, but apparently not so much as director/cast member Terry Gilliam. “I find it depressing that we’re getting back together again,” he stated cheekily in a recent interview with the London Evening Standard. “We worked so hard to get careers beyond it, to get to this stage, and now we’re being dragged back again.”

And for those who don’t quite get British humor, yes… he was joking (mostly). 🙂