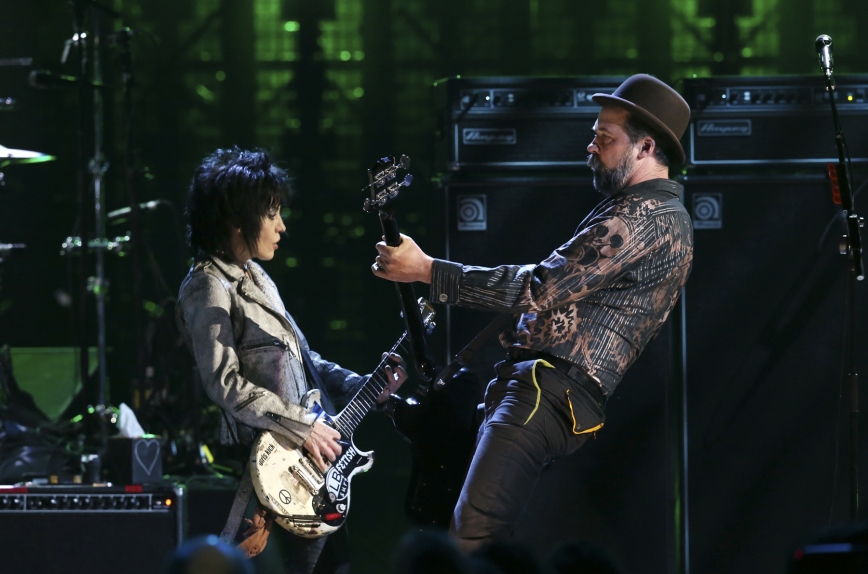 It was truly a night to be remembered. The 29th Annual Rock and Roll Hall of Fame Induction Ceremony honored Hall and Oates, Cat Stevens (Yusuf Islam), Peter Gabriel, Linda Ronstadt, KISS, and Nirvana at the Barclays Center in Brooklyn. The night was full of nostalgia and recognition of the newly inducted artists, but it was clear that Nirvana stole the show. It was the reunion everyone had been anticipating. We had only seen it once when the grunge band teamed up with Paul McCartney in 2012 during a benefit for the victims of Hurricane Sandy. Last night, Nirvana reunited on stage for the second time since the suicide of frontman Kurt Cobain. Yes, it was a big deal.

The performance of the night featured surviving members Krist Novoselic on bass and Dave Grohl on drums, along with guitarist Pat Smear. Who would fill Kurt Cobain’s shoes? Rumors swarmed after a picture of Novoselic’s bass, Grohl’s drumkit, Smear’s guitar, and Joan Jett’s stickered Melody Maker was shared on the Foo Fighters’ Instagram page. (Clever hint from Dave Grohl’s band.) But I don’t think anyone expected an array of women to front the band. Joan Jett, Kim Gordon, St. Vincent, and Lorde stepped up to perform classic Nirvana songs!

Joan Jett kicked it off with “Smells Like Teen Spirit” which instantly ignited the crowd. Sonic Youth’s Kim Gordon was up next. She gave an energetic performance of “Aneurysm.” St. Vincent, who performed a cover of “Lithium” at Chicago’s Riviera last Saturday, took on the song once more. Finally, Lorde led “All Apologies” with the support of the other artists. Nirvana is being praised for their choice of powerful and fitting singers. Job well done, ladies.

It was the perfect tribute to Nirvana’s history and influence while honoring the legacy of Kurt Cobain. April 5, 2014, marked the 20th anniversary of his tragic death. This monumental performance and well-deserved induction into the Rock and Roll Hall of Fame seemed to have come at the right time. Now who’s ready for the Kurt Cobain musical, biopic, and documentary? We know we are!